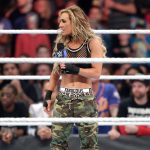 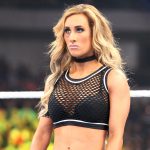 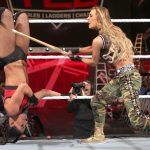 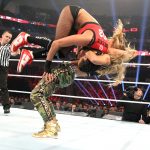 Second Match: Nikki Bella vs. Carmella in a No Disqualification Match 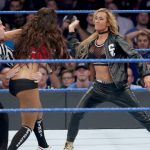 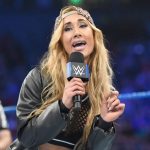 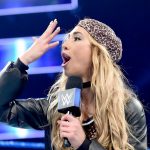 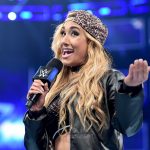 Before Carmella’s opponent comes out, she wants to send a message to Nikki Bella’s boyfriend, John Cena. The crowds asks Carmella how she’s doing? She’ll be doing alot better when she’s out of here. Carmella wants to publicly to apologize for what she’s going to do to Cena’s girlfriend at TLC. She’s going to hit Nikki so hard in the chest with a steel chair that her own Bella Twins will be popping out of her back, that’s a promise.

Carmella is going to be doing Cena a favor because she’s going to rearrange Nikki’s face to the point there will be no wedding. Cena is welcomed for that. Nikki will be posting new videos on her new YouTube channel from her hospital bed. She doesn’t know or care what the E! Network is going to do when they have to cancel Season 2 of Total Bellas. Nikki storms down to the ring and Spear’s Carmella. Nikki goes to the ground and pound attack. The brawl ensues, referee Dan Engler tries to restrain Nikki. Carmella slaps Nikki. Nikki continues the onslaught and Carmella spills out of the ring and heads to the back.

Looking to end her rivalry with Carmella once and for all, Nikki Bella has successfully petitioned to face The Princess of Staten Island in a No Disqualification Match at WWE TLC.

The rules will be thrown out the window Sunday, Dec. 4, leaving the bitter foes to settle their grudge in one of the most lawless matches imaginable. Such extreme circumstances speak to the uncontrollable hostility that exists between the two Superstars.

Since Nikki’s triumphant return in August from a career-threatening neck injury, Carmella has repeatedly attacked and belittled the fearless former Divas Champion. The Fabulous Superstar has even gone so far as to say the only reason for Bella’s success in WWE is her relationship with John Cena.

Things hit a tipping point at Survivor Series when a mystery attacker took out Nikki prior to the Raw vs. SmackDown LIVE 5-on-5 Traditional Women’s Elimination Match. Though Nikki was unable to positively identify her assailant, she accused Carmella of being responsible for the blitz. Carmella denies any wrongdoing — in this instance, at least — but it doesn’t change the fact she and Nikki are headed for a collision course at WWE TLC.

Watch WWE’s version of a demolition derby, WWE TLC 2016, when it airs live on the award-winning WWE Network Sunday, Dec. 4, at 8 ET/5 PT.

Charlotte tags in Nia. Nia rams Becky to the corner. Becky tags in Carmella. Nia drops Carmella with a shoulder tackle. Carmella tags in Bliss. Nia with a body avalanche to Bliss. Nia tags in Naomi. Nia with the Lights Out to Naomi. Naomi tags in Natalya. Natalya and Carmella with a double shoulder block, but Nia stands still. Nia connects with a double clothesline. Nia tags in Fox. Carmella with a massive hair whip to Fox. Carmella goes for the Bronco Buster again, but Fox ducks out of the way. Fox with a series of clubbing blows to the back of Carmella. Fox with the Scicssors Kick to Carmella. Carmella is officially eliminated. Bliss connects with the Twisted Bliss and Fox is now eliminated. Bliss ducks a clothesline from Charlotte. Naomi tags herself in. Naomi with a sitout jaw breaker to Charlotte. Naomi knocks Bayley off the ring apron. Naomi with a wrecking ball dropkick to Nia. Naomi follows that up with a flying crossbody off the top turnbuckle. Naomi with a leg lariat to Nia. Nia sends Naomi face first to the steel ring post. Nia knocks Naomi off the ring apron. Naomi is counted out. Naomi is officially eliminated.

Bliss and Sasha are now in the ring. Bliss stomps on Sasha’s back. Bliss tags in Natalya. Natalya stomps on Sasha chest. Sasha with a back elbows that knocks Team SmackDown off the ring apron. Sasha with a double knee stomp to Bliss. Sasha with a flying double knee stomp to Natalya off the ring apron. Natalya with a small package for a two count. Natalya goes for a delayed vertical suplex, but Sasha gets back on her feet. Sasha goes for the Backstabber, but Bliss blocks it. Natalya rolls Sasha up for the pinfall. Sasha Banks is officially eliminated. Natalya with a series of knife edge chops to Charlotte. Natalya follows that up with a a release german suplex. Charlotte sets up for a moonsault, but Natalya counters with a sitout powerbomb for a two count. Natalya gets Charlotte in the Sharpshooter, but Charlotte reaches the bottom rope. Charlotte with a running boot to Natalya. Natalya is officially eliminated. Becky clotheslines Charlotte. Bliss tags herself in. Becky and Bliss get into a shoving contest. Nia Jax with a double suplex to Bliss and Becky.

Nia goes for a running splash, but Biss ducks out of the way. Becky with a missile dropkick to Nia. Becky and Bliss with double DDT to Nia for a two count. Becky gets Nia in the DisArm Her and Nia taps out. Nia Jax is officially eliminated. Nia drags Becky out of the ring. Nia whips Becky back first into the barricade. Nia rolls Becky back into the ring. Charlotte with a big boot to Bliss. Alexa Bliss is officially eliminated. Charlotte rolls Becky back into the ring. Charlotte stomps on Becky’s chest. Charlotte goes for a pin, but Becky kicks out at the count of two. Becky fires up with two clotheslines and a leg lariat. Becky with a fire forearm in the corner. Becky connects with the exploder suplex.