The New Day come out for their match and then they do some invisible Double Dutch with Carmella. 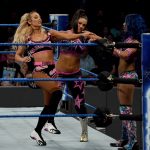 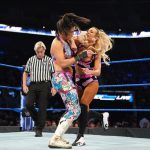 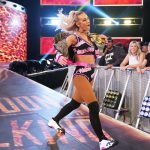 Truth wooos as Charlotte and Carmella walk to the ring.

We are back and Tom thanks USA Network for what they have done for Smackdown over the years. Corey reminds everyone that Raw is still on USA Network. 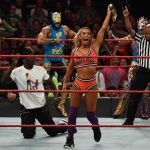 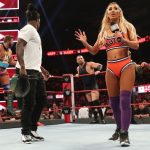 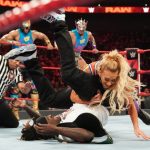 R Truth and Carmella run to the ring as they look for the Benny Hill gang. Carmella tells them to stop and she asks for a mic. She tells them to stop chasing them. She cannot take that any more. They are on the run to capture and retain the 24/7 Title. Truth says they are going to get out of here thanks to his clown friend and he will take them to Derry Lane. Carmella says she cannot do this any more.

Truth hugs Carmella and Carmella with a rollup for the three count.

Carmella celebrates and then she gets on Truth’s back and they go to the back and we have women chasing the new champ to the back.

We take a look at a tour that Carmella and R Truth got at the University of Tennessee. Truth says he is confused and he is worried that the balls hanging from the ceiling will fall on them. Knox County mayor, Kane shows up to talk about Pat Summit. Truth asks how big were those girls? They had to be forty feet high. Truth asks Kane if he knows him and he calls him Magic Johnson, and then Larry Bird. Kane says he would love to take Truth on a tour of Knoxville. Truth asks if Kane has any Secret Service people with him and Kane says no. Truth is excited to be on a tour with the President.

Match Number One: Drake Maverick and Renee Michelle versus R Truth and Carmella in a 24/7 Championship Mosh Pit Match

Renee and Carmella have to be held back. 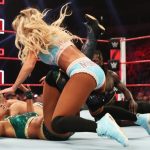 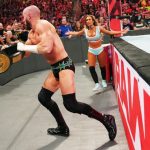 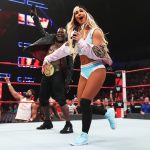 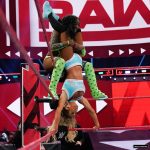 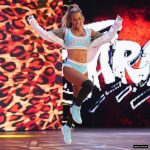 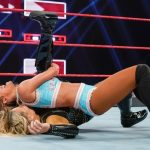 Match Number Seven: Alexa Bliss (with Nikki Cross) versus Natalya versus Naomi versus Carmella in a Number One Contender Elimination Match

Before the match starts, the person who will face the winner of this match at SummerSlam makes her way to the ring. 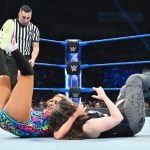 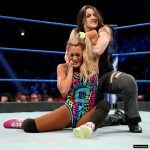 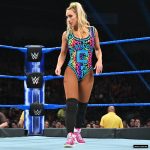 Nikki says she is glad to know that the Bayley we saw last night was the real Bayley.

Bayley says Alexa is manipulating Nikki and she asks Nikki if she is okay helping someone else win a championship. Bayley says she understands that she is facing impossible odds, but Nikki does not need Alexa. Bayley says she is bringing everything on Sunday. What happens when Alexa loses and blames you for the loss?

Nikki says she wants to help her friend, but Bayley would not understand that because she says Bayley’s friends have abandoned her. Alexa is not using her. Alexa promised that when they win on Sunday, they will be co-champions.

Nikki tells Bayley to stick around for Nikki’s match with Carmella. She will show that when it is time to play, Nikki gets all the fun.

Nikki blocks a kick and Carmella with an inside cradle for a near fall. Carmella has another super kick blocked and Nikki with a swinging neck breaker for the three count.

Just five days before Nikki Cross joins Alexa Bliss for a 2-on-1 Handicap Match against Bayley at WWE Extreme Rules in The Twisted Sister’s first-ever SmackDown Women’s Title Match, she will face Carmella one-on-one tonight on SmackDown LIVE. Find out how the up-and-coming Superstar fares against the explosive former SmackDown Women’s Champion at 8/7C on USA Network. 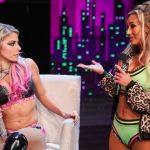 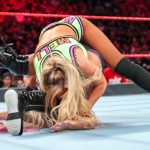 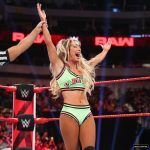 Alexa Bliss and Nikki Cross walk in the back as we go to commercial.

We are back and Alexa Bliss comes out for A Moment of Bliss. Alexa sends her thoughts for Bobby and Braun.

We take a look back at Nikki’s victory over Bayley from Smackdown.

Nikki says she wants everyone to know that none of this would have been possible without your support and guidance. You were the first person to take her seriously and welcome her with open arms. Nikki says she will always be grateful.

Alexa says this is all about Nikki.

Carmella interrupts and makes her way onto the stage.

Carmella says this is Nikki’s moment of bliss. You pinned the champion so why is Alexa getting a title match?

Alexa wants to know why is Carmella trying to steal the spotlight from Nikki.

Alexa says that Carmella is only R Truth’s side kick.

Carmella says she will show Alexa what a sidekick is what they go to the ring and she will kick Alexa in the head.

Carmella with a rollup for the three count.

Carmella is walking in the back looking for R Truth and she sees Sonya Deville and Mandy Rose. Sonya says that she is going to beat up her friend Ember.

R Truth shows up and he says he has to hide.

Drake Maverick shows up and he says he does not have a referee and he has nothing. He says Truth invaded his wedding. It was his special day. He spent thousands of dollars of his mother in law’s money to walk down the aisle as 24/7 Champion. He says he has nothing and he tells Truth that Truth has ruined his life.

Truth hugs Maverick and he says he is sorry. Truth says he thought it was Carmella’s wedding. Truth tells Hornswoggle if this means so much to him. He tells Truth to get a ref and do it. Truth tells Drake psych and he says he loves the title more than Drake loves his wife. Truth runs away and the Benny Hill Gang knocks Drake over as they chase after Truth.